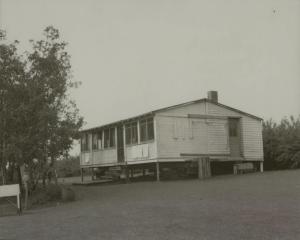 In the early nineteen hundreds, approximately 1910 to 1914, golfers bashed about balls in a sheep and cow pasture east of the present Christian Reformed Church. In 1914, golf moved west to the old McCauley sheep pasture, the present site of the Lacombe Golf and Country Club. At that time, the land had been surveyed for lots for building the Hyde Park subdivision of Lacombe. The first fairways and greens were surveyed and marked out by E. C. Chapman, Alfred Lundie and his son Jack Lundie. Alfred and Jack paced off the distances for the original nine hole course.

The First World War intervened, however, and golf and many other sports were set aside for grimmer tasks. Then, the year 1919 saw the formation of a club and the permanent establishment of a nine-hole golf course.

In March 1925, Lacombe Golf and Country Club was registered as a joint stock company capitalized in the amount of $6,000.00, divided into 120 shares of $50.00 each. The first five subscribers having one share each were G. T. Jackson, E. C. Chapman, W. N. Morrison, Alfred Lundie and Dr. J. H. W. Moore. W. N. Morrison was the first President of the Club. 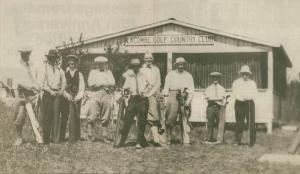 During the 1930’s and 1940’s, the club became quite active, and the course went through a series of improvements. In 1930, holes 2 and 3 were combined and a new number three fairway 115 yards long was cleared and opened in its present location. Hole four was lengthened by 40 yards, and eight was lengthened by 35 yards and made into a “dogleg” left, (approximately where today’s No. 1 green is located). The first Men’s Open was in 1930, a two day event. The local newspaper reported in April 1939 that a two-ball scotch foursome medal score tournament, with handicaps, was to be held on June 8, 1939, for an entry fee of 10 cents.

The 1940’s saw some significant administrative changes to the club. Originally in 1925, a 20 year lease option was taken out with the town. A March 19, 1942 letter between G. T. Jackson and Norman Morrison mentioned that a request was made of the Town of Lacombe Council for a title of the land to be transferred to the Golf Club. Council stated that there were still three years left on the 20 year option written up in 1925. At the termination of this option, the council stated that thay would only grant a ten year lease, possibly twenty years, for an annual rent of $1.00. A March 26, 1942 letter from the Golf Club to the Town expressed disappointment in this decision and stated that Council had failed to honour the option clause to purchase. The Club refused any terms of a lease and recommended council review the decision. On April 22, 1942, the Lacombe Town Council reviewed the option clause and granted a transfer of the property, free of all encumberances. The sum of $1,435.00 paid by the Club was acknowledged as payment in full. 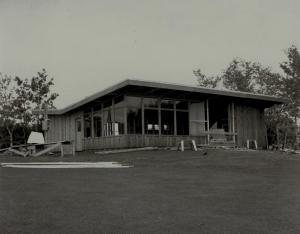 The Club continued to expand and change in the following decades. In 1958, the Shareholders at the Annual General Meeting approved the addition of a second nine holes. During the winter of 1958 -1959, Art Park, Dr. Bud Malone, and Gord Sweet walked and marked out the new nine fairways. Brushing equipment cleared the fairways that winter as well. The summer of 1959 saw the new sand greens being built and some fairways being seeded. Tee boxes were made of wood with a rubber mat on top. The new back nine was fully in play in 1960.

The next major change came at the Annual Shareholders Meeting in October 1968. Archie Martin presented a motion to put in grass greens, tee boxes and a watering system. After some heated discussion, the shareholders supported this motion. During the winter of 1968 – 1969, planning and financing was put into place. Under the chairmanship of Harold Johnston, 18 captains and 3 or 4 members per hole were selected. Ray Kinley Construction moved and hauled dirt to the areas where the new greens and tee boxes were to be built. A new well was drilled by Bob Flinn Drilling. Without any architectural or professional help, the members used tractors, trucks, rakes and shovels to design and build 18 grass greens and tee boxes. Also, a water lagoon was dug in front of number 6 tee box. Volunteer members completed all these tasks, and all the greens and tee boxes were in play by 1970.

A finishing touch was added with 18 new white birch signs. Percy Thompson, Cecil Pallister and Cliff Carson designed, routed and painted the signs. The white birch was donated by Ray Kinley, and the signs were used until 1985. After 30 years, thirteen of these greens are still used and classified as top quality. Some new greens, tee boxes and fairways have been replaced gradually over the next 15 years.

Even with these improvements, the price of golf remained reasonable in the 1960’s and 1970’s. In 1969, green fees were $1.50 weekdays and $2.50 weekends and holidays, and a 7 round package was $7.00. Membership during the mid 1970’s was $25.00 and $30.00 per year. One year a $5.00 increase was applied, and a few members went elsewhere to golf because of the sharp increase. To get around the links, the first power cart was owned by Don McFadden. Next came Cushman and Badger carts from Jasper, followed by a variety of brands of newer carts.

In addition to the continued development of the course itself, the clubhouse has gone through as series of changes. The first clubhouse was a cottage moved in from Gull Lake. Later, it was moved back to Gull Lake and used as a cottage until 1991. From the time of the old so-called “chicken coop” clubhouse, three additions have been made, including the present clubhouse.

From its inception, the Lacombe Golf and Country Club has had a superior course and dedicated members. The club has countinued to grow and change with the times during the past 85 years, and it will certainly continue to develop as one of the best golf courses in Central Alberta.